WRU rangers transferring an animal to another cage.

KOTA KINABALU: Apart from humans, wildlife and pets were also not spared by the recent flash floods that hit parts of Sabah’s west coast including Penampang, Kinabalu, Putatan and its surrounding areas.

For wildlife rescue rangers, they had a busy couple of days relocating their rescued animals following a landslide which damaged one of their holding facilities at Kg Potuki, Penampang to other places.

Dr Sen Nathan, manager of the Wildlife Rescue Unit (WRU) said that some of the slopes at their rescue centre failed and greatly damaged their wildlife holding areas.

"So, we need to ‘translocate’ the animals to safer facilities as well as to the Lok Kawi Wildlife Park nearby," he said, adding the losses faced were estimated to be around RM200,000, or more.

The team, together with Dr Sen, successfully translocated a total of two crocodiles, three wild-bearded pigs and some macaques. Flooded shelter for the strays.

He said due to this catastrophe, the team might be delayed in responding to calls and complaints from the public in regards to wildlife rescue matters.

Now, the team was busy clearing up the post-flood debris as they tried to properly assess the damages.

Meanwhile, rescuers at the Shelter of Hope Penampang have been working tirelessly over the past few days scrubbing floors, sweeping away floodwater and mud as well as just trying to get things back to how it was prior to the Sept 15 floods.

Dozens of cats and dogs that had been moved out of their cages to the upper level of the owner’s house, so that they would be safe and dry. WRU rangers bringing a macaque to another location following floods.

"The flood this time scared me so much because the water was gushing in so rapidly and didn't show any signs of slowing down. My thoughts were to get all the dogs up on the roof if the situation went from bad to worse," she said.

She frantically made calls, asking for help to relocate her strays (which were later cancelled as the floodwater stopped rising) and just to make sure that all the cats and dogs were safe.

Adrienne said in September alone, the shelter was flooded twice. Aftermath of the flood at the shelter.

"It's a norm for the doggies now and they enjoy splashing and jumping in the flood water but they know when fun is over and to go to safety," she said.

This time, the water level was higher than what they had experienced before, and when it subsided, they were left with over a foot deep of mud and debris.

Adrienne said that although they were used to these floods, she hoped that the government would come up with proper mitigation plans and added that developers should really take the people’s livelihood into consideration before they start any projects. 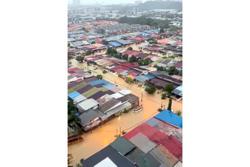