IPOH: Three unvaccinated homeless people who were placed at a temporary shelter here have been allowed to leave.

"We cannot force them to get vaccinated. They also did not give any reasons why they declined it.

"We were forced to let them go as no welfare homes would accept them," she told reporters after closing the temporary shelter for the homeless at the Red Crescent Society Hall here on Wednesday (Sept 15).

"We have urged them not to wander from place to place," she said.

On the temporary shelter, Wan Norashikin said it had been opened since June 5, with 63 homeless folk placed there.

"Before the closure of the shelter, 13 homeless folk were reunited with their families and some have been placed at welfare homes.

"Some were referred to the National Anti-Drugs Agency while there were three deaths due to Covid-19," she added.

Wan Norashikin also thanked the frontliners for their commitment in taking care of the homeless at the temporary shelter.

"Some were even forced to go into self-quarantine having gotten into close contact with some of the homeless who were tested positive for Covid-19," she said.

"The Perak Mentri Besar has agreed to give RM200 to each of the 110 daily workers who were involved with the shelter.

"These include the cleaners from the Ipoh City Council as well as volunteers from other agencies and non-governmental organisations," she added.

Wan Norashikin said the state would conduct a study on setting up a permanent shelter for homeless folk in Kinta district.

She said they would need to find out the requirements, cost and a suitable location for such a shelter.

"The plan is to set up a big shelter in Kinta next year as the district has the highest number of homeless folk," she said.

"We want to look after their welfare and health as they are also our rakyat," she said.

Wan Norashikin said there was another permanent shelter in Larut, Matang and Selama district, which was set up early this year.

"It was set up and run by the District Office, with the collaboration of a non-governmental organisation called Rakan Jalanan.

"It's a small place that is able to accommodate a maximum of 20 people," she said.

"It is however closed for now due to the Covid-19 pandemic," she added. 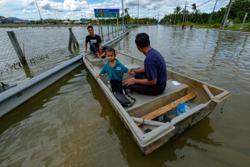