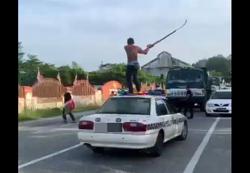 IPOH: The police have arrested a drug-high senior citizen who ran amok in front of the Gopeng police station, about 17km from here.

Perak police chief Comm Datuk Mior Faridalathrash Wahid said the 61-year-old, who climbed on top of a police mobile vehicle while wildly swinging around a scythe and a machete, was arrested with the help of the Gopeng Fire and Rescue Department yesterday at about 8.30am.

He said the man tested positive for methamphetamine and heroin.

“He sustained some injuries during the arrest.

“Based on information received, the man had run amok earlier near the Lawan Kuda wet market where he had taken a motorcycle,” he said in a statement. Tense moment: A screencap of a video showing the shirtless man seen standing on top of a police mobile vehicle with the machete and scythe in hand while screaming at policemen who had him surrounded.

“He had also ridden into a housing area in Kopisan before going to the Gopeng police station, brandishing the machete and scythe at policemen,” he said, adding that several video clips of the incident have gone viral following the arrest.

In a 43-second video clip, the shirtless man was seen standing on top of a police mobile vehicle with the machete and scythe in hand while screaming at policemen who had him surrounded.

Firemen could then be seen using a high-pressure fire hose to jet water at the man, forcing him down from the car. Police personnel then arrested him.

Comm Mior Faridalathrash said the man would be investigated under Section 427 of the Penal Code for committing mischief and causing loss or damage.

He said the man will also be investigated under Section 90 of the Police Act, Section 6 (1) of the Corrosive and Explosive Substances and Offensive Weapons Ordinance and Section 15 (1) (a) of the Dangerous Drugs Act.

“We would like to advise the public not to make any speculations about the incident to prevent confusion and anxiety,” he said, adding that the man has 16 prior crime cases for various offences, including drugs.

“We will get a remand order tomorrow,” he added. 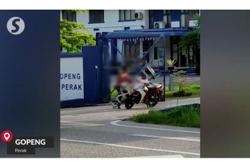