Weather across Sabah's west coast improved on Sunday, where it was sunny compared to the downpours on Friday and Saturday.

However, villagers at the relief centre did not wish to return to their homes yet for safety reasons, said Beaufort district officer Abdul Imam Basirun.

"According to reports from the ground, water levels at affected villages have not receded.

"At the same time, there were concerns about crocodiles and snakes appearing due to flooding at Kampung Brunei, one of the affected villages which is near a river.

"The villagers who are at the relief centre prefer to stay put for now.

"Despite good weather today, we are worried that the rain might return later tonight (and worsen flooding)," he said when contacted Sunday.

As at noon, victim Simon Sange Tupe, 64, was still not located by the search party.

On Saturday (Sept 4), 37-year-old victim Juning Maturun, who was a passenger in the car, was discovered still strapped to his seat when rescuers managed to retrieve the vehicle. 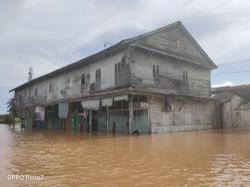