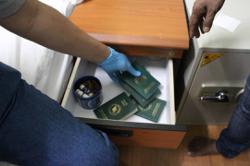 KUALA LUMPUR: An illegal money lending syndicate run by Bangladeshis has been busted following a raid by the Immigration Department at a private residence in Bukit Bintang.

Immigration director-general Datuk Khairul Dzaimee Daud said two Bangladeshi men, including the mastermind known as “Ah Long Bangladesh”, were detained in the raid conducted at about 1am on Thursday.

“The mastermind tried to flee but we managed to corner and detain him, along with an accomplice.

“We seized nine Bangladesh passports and RM50,000 in cash. We also seized several documents of companies as well as rental contracts believed to have been used by the syndicate,” he said when contacted yesterday.

Initial investigations revealed that the syndicate has been running illegal money lending and money transfer services for foreigners in Kuala Lumpur, he added.

“They have been in operation for about a year.

“They were targeting Bangladeshi nationals as their main customers,” he said.

Those detained have been placed at the Immigration depot in Semenyih, he added.