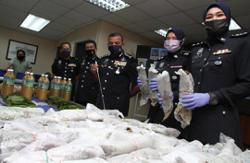 KULAI: Two men have been arrested here for allegedly processing and distributing ketum leaves around the Kulai and Johor Baru districts.

Kulai OCPD Supt Tok Beng Yeow said that the duo, between the age of 32 and 46, were arrested in a raid at about 4pm on Thursday (Sept 2) at a house in Taman Sepakat, Senai.

“The police found some 47 packs of leaves, believed to be ketum, weighing about 490.4kg in the house.

“Some 30 bottles containing green liquid, believed to be ketum juice, were also found in the house. The cops also seized some equipment believed to have been used by the suspects to process the ketum,” he said in a statement on Friday (Sept 3).

He added that the total value of the items seized was about RM16,000.

“The suspects admitted that they have been involved in processing and distributing ketum around the Kulai and Johor Baru districts.

“One of the suspects was arrested in June this year for the same offence and has two priors under Section 15(1) of the Dangerous Drugs Act 1952 and Section 30(3) of the Poisons Act 1952,” he said, adding that they both tested negative for drugs.

He said the two suspects are being remanded for four days from Friday (Sept 3) until Monday (Sept 6).

The case is being investigated under Section 30(3) of the Poisons Act 1952 for possession of a psychotropic substance.

Under the Act, the suspects can face a maximum fine of RM10,000, a jail term of not more than four years or both, if found guilty. 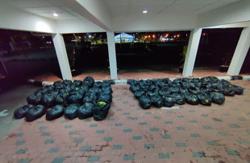 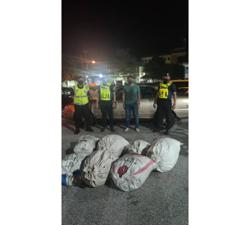