The thought of saving lives drives them to donate blood

Gift of life: Tai showing her certificate of appreciation and her donation book. The housewife has donated 17 times. — RONNIE CHIN/The Star

IPOH: Having first donated blood to help a friend battling leukaemia in 1998, Ooi Siok Hoon had no qualms answering the call from Hospital Raja Permaisuri Bainun when it announced it was running low on blood types “O” and “B”.

Ooi, who is in her 50s, said her friend eventually died a few years later but that is what drove her to keep on donating blood.

The lawyer was among those at the Ipoh Chinese Chin Woo Athletic Association hall for a blood donation drive, held to mark National Day.

To date, the association has organised more than 100 community blood donation drives in Ipoh.

Ooi was not in the least bit squeamish about the process.

“I saw my parents do it, too. They were the ones who told me about the importance of donating blood and how much it could help others.”

“Even when the pandemic started, we still donated blood as usual because we know how just a pint of blood can save lives,” she said, adding that this would be her 37th time donating blood.

Housewife Tai Siew Ling, 55, decided to donate blood after seeing a campaign poster on the matter.

“I started donating about 10 to 11 years ago. I can’t remember how I felt then but it wasn’t painful at all.

“After donating a few times, my husband joined me as well. I have donated blood 17 times,” she said, adding that her blood type is “O”.

Tai said she had encouraged some of her neighbours to donate but many were still hesitant.

“Whenever I am about to donate blood, I would invite my friends or my neighbours to join me but with the ongoing pandemic, they are a bit worried about their safety. Others are afraid of the needles,” she said. 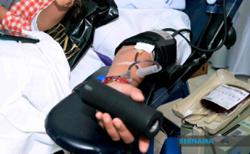 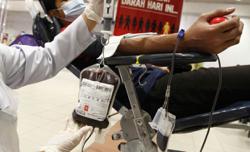