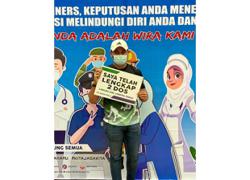 In a statement on Saturday (Aug 21), the Bintulu MP said BDMC had no choice but to review all standard operating procedures for entry and exit into the district.

Among the procedures he suggested to be reviewed were requiring police permits for inter-district travel, testing drivers of logistics vehicles and more frequent testing.

He said that previously, workers only needed to show a letter from their employer to enter Bintulu, but some letters were found to be fake, issued by non-existent companies.

Tiong said he would be asking BDMC to conduct an in-depth study on this to stop accepting such letters from employers and instead, to require a police permit and produce a negative Covid-19 test result before they are allowed to enter the district.

"I have requested the Bintulu Health Department to develop countermeasures and look into reducing the costs of testing on people who must enter and exit the district frequently to ease their burdens," he said.

Strict entry measures, he said, were needed to prevent the situation from getting worse.

"If the authorities do not take the proper precautions as soon as possible, all will face a far more severe situation. In Bintulu currently, there are 11 transport drivers from four different logistics companies being infected. This is why each logistics driver must get tested every two weeks to ensure everyone's health," he said.

Tiong also suggested for the Health Department and hospitals to be prepared to reopen previously suspended low-risk quarantine and treatment centres (PKRC).

He said the pandemic situation in Bintulu had worsened over the past few days, with 76 new cases on Thursday (Aug 19), all of whom had been vaccinated.

Another 43 new confirmed cases were reported on Friday (Aug 20) later, with 37 in Bintulu, four in Tatau, and two in Sebauh. Of these 39 were unvaccinated as they were underage. 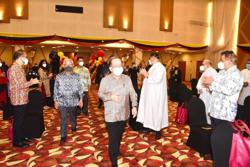