ALOR SETAR: Three people were swept away in a flash flood on Gunung Jerai after heavy rain lashed on the surrounding Yan district on Wednesday (Aug 18).

Three of the victims, in their 30's, were later found safe and unhurt while one man, in his 40's, is still missing.

All four are employees of the Jerai Hill Resort.

Two hill and water recreation parks - Titi Hayun and Seri Perigi were also flooded by the rain which fell continuously from 4.30pm.

119 people, including 14 Covid-19 patients were evacuated.

The Covid-19 positive villagers were placed at Sekolah Kebangsaan Teroi. Others were relocated to Sekolah Menengah Kebangsaan Agama (SMKA) Yan.

Kedah Mentri Besar Muhammad Sanusi Md Nor rushed to scene of the flood and was briefed on the situation at the Operation Room of Yan District Office late Wednesday evening. 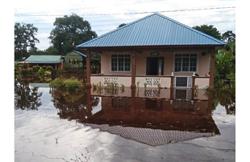