DAP’s Segambut MP Hannah Yeoh said the biggest issue she has with Perikatan Nasional is the purported incompetency of its Cabinet Ministers that led to the worsening Covid-19 situation.

"Today's speech does not address that incompetency and changes nothing in helping Malaysia out of the current mess," she tweeted on Friday (Aug 13).

Similar sentiments were echoed by PKR’s Lembah Pantai MP Fahmi Fadzil (pic), who said Muhyiddin admittedly lost his Parliamentary support during his live address, and he should resign according to Article 43(4) of the Constitution.

"Article 43(2)(a) states that the Yang di-Pertuan Agong has the prerogative to determine which MP has the majority to be appointed Prime Minister. Not Mahiaddin," he tweeted.

He said the government needed the support of the Opposition parties during the motion of confidence in Parliament in efforts to bring the country out of the crisis.

Meanwhile, PKR's Subang MP Wong Chen said Opposition leaders will be meeting soon and a formal reply to Muhyiddin's "offer" will be made.

"I will not be commenting on this matter until Pakatan Harapan issues a statement," he briefly tweeted.

He pointed out Article 43(4) of the Constitution that deals with a prime minister's majority.

"Where in the Federal Constitution does it say that a PM who has lost majority cannot resign until another MP with majority is identified?

"Article 43(4) states that a PM who ceases to have the confidence of the majority of the MPs shall tender the resignation of the Cabinet.”

"The fact is, Muhyiddin has lost his support and power. He is doing all he can to maintain his position," said Syed Saddiq.

"I reject the carrot and stick approach by Muhyiddin. Please resign!" he tweeted.

However, Yii said such an offer should have been extended to Opposition MPs earlier.

"Fact of the matter, this does not deal with the core issue which is the incompetency of their Cabinet. Fact is, they should have announced shrinking of his over-bloated Cabinet if it's really about the people.

"While I am all for political stability, we cannot excuse or stabilise failures," said the DAP MP.

It is understood that a formal statement will be issued by Pakatan soon.

Earlier Friday (Aug 13), Muhyiddin, in a special address, had sought bipartisan support from the Opposition, saying that such support by Opposition parties is crucial in order to bring the nation out of the political crisis.

Muhyiddin said if the Opposition agrees to bipartisan support, a special Dewan Rakyat sitting will be convened soon to table a confidence motion at the soonest time possible.

He also assured that he will make decisions that are honourable and constitutional in his attempt to solve the ongoing political crisis. 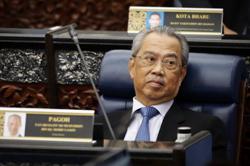