BUKIT MERTAJAM: Thieves broke into the St Paul Anglican Church at Jalan Besar, here, and got away with equipment worth more than RM30,000.

The church Vicar's Warden Stanley Micheal said among the items that were taken from the church were a laptop, public announcement systems, LCD display projector, an air conditioner, lawnmower, the whole setup of CCTV systems of the church and components from an electric organ.

"Our fuse distribution box with all electrical wiring was also removed," he said.

Stanley, 59, said he suspected the incident happened on Tuesday (Aug 3) early morning where many equipment in the church were vandalised.

He said a police report was lodged on Friday (Aug 6) at Central Seberang Prai police headquarters.

He said the case will be investigated under Section 457 of the Penal Code for housebreaking.

He urged those with information on the incident to contact the nearest police station. 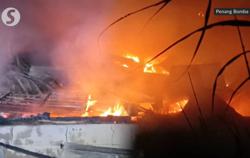