State Health and Environment Committee chairman R. Vidyananthan said that the Environment Department (DOE) conducted an investigation at Sungai Kim Kim following complaints from the public about a foul smell coming from the river around Kampung Bukit Pulai in Pasir Gudang.

"DOE staff went to the scene at about 10pm on Wednesday (July 28) upon receiving the complaints.

"When they arrived at the location, they found that the water in the river had turned dark and had a foul smell.

"They then inspected the areas around the river and based on early investigation, the pollution was suspected to be caused by waste being dumped from a non-industrial building," he said in a statement here on Sunday (Aug 1).

He said that the waste was coming from maintenance works that were being conducted in the building.

"The activity has caused untreated waste to flow into the nearby river.

"On July 29, the parties involved were told to stop all maintenance works and further investigations were carried out," he said.

He said that samples from the water have been collected and sent to the Malaysia Chemistry Department lab for further actions under the Environmental Quality Act 1974 (Act 127).

"The parties involved have been told to stop the dumping of untreated waste and to immediately take improvement measures.

"Drones have also been flown at the area and in situ water tests have also been conducted around areas where the public complaints were coming from to monitor the effects of the pollution," he said.

He reminded parties from every sector that are allowed to operate to adhere to the Environment Quality Act 1974.

"Stern actions will be taken against those who fail to adhere to the Act," he said.

He also told the public to inform the DOE of any pollution incident at the department's hotline at 1-800-88-2727 or email them at aduan_k@doe.gov.my or through their online portal http://eaduan.doe.gov.my.

In March 2019, toxic pollution in Sungai Kim Kim resulted in over 4,000 people falling ill, which also saw the temporary closure of 111 schools in the Pasir Gudang district.

The district was again hit with similar pollution three months later, which also caused dozens to fall sick and saw another temporary closure of 111 schools. 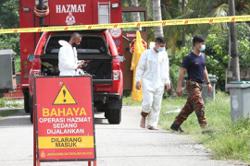