Hisham: BN and Umno MPs are supportive of Perikatan govt

Hishammuddin, who is also Barisan’s treasurer-general, said lawmakers from Barisan and Umno had made their stand official, which was announced by Deputy Prime Minister Datuk Seri Ismail Sabri Yaakob.

“My close friends and I in the Dewan Rakyat not only support but share the same views as announced earlier to continue support of the current government,” he said during an event here at the Institute of Strategic and International Studies Malaysia yesterday.

Hishammuddin was asked to clarify the position of Umno and Barisan lawmakers on their support for the Perikatan government.

Ismail Sabri said the Perikatan government is still intact as it enjoys the support of more than 110 MPs.

Ismail Sabri said the political situation in the country is too volatile at present, and it could undermine efforts to address the Covid-19 pandemic and economic stagnation.

“Therefore, I hope the people will be calm in facing this situation and let’s hope for this political impasse to end immediately,” he said.

This follows after Istana Negara had rebuked the Perikatan government for contravening the Constitution when it revoked the Emergency ordinances without His Majesty’s consent. 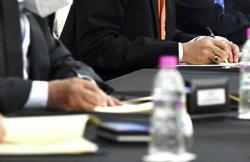