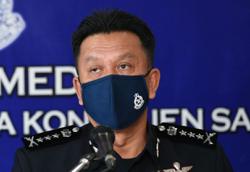 Sabah Police Commissioner Datuk Hazani Ghazali said they would be investigated under the Anti-Trafficking in Persons and Anti-Smuggling of Migrants Act for suspected involvement in smuggling migrants from Lahad Datu to Tawau.

Police are also looking at the possibility of using the Prevention of Crime Act against the three suspects who were arrested on July 13.

“The case is still under investigation,” Comm Hazani said when contacted.

Viral pictures of the suspects and the vehicles seized have been spreading on social media the last two days.

The three suspects from Kunak, aged between 39 and 48, were initially arrested for obstructing a policeman from carrying out his duties, as well as failing to stop at a roadblock at KM38 Kunak-Lahad Datu at about 8pm on July 13.

It is learnt that the suspects in the two Health Ministry-registered vehicles had ignored orders to stop when police carried out an inspection and spotted some baggage inside.

Both drivers sped through the roadblock and also two other roadblocks along the stretch.

Following this, an investigation was carried out, leading to the arrest of the suspects in Tawau.