KUALA LUMPUR: A love scam syndicate operating from a luxury condominium in Bandar Manjalara here has been crippled by a series of police raids.

Police detained 18 Chinese nationals in five raids at the condominium during the operation codenamed Ops Pelican on Friday.

The suspects – 14 men and four women – were believed to be part of a syndicate that had been operating for about two months, Bukit Aman Integrity and Standards Compliance Department director Comm Datuk Azri Ahmad said.

The operation was led by the department’s officer in charge, Supt Azmi Shukor, after police received information on suspicious activities involving foreigners at the condominium.

“They were targeting victims from China. We believe they earned about RM300,000 a month from their scams,” Comm Azri said in a statement yesterday.

Mobile phones, computers, electronic gadgets and RM126,000 in cash were also seized during the raids, he added.

“We will investigate whether any police force members were in cahoots with the syndicate,” he said. 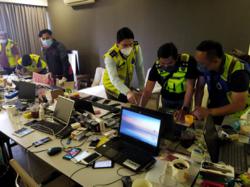