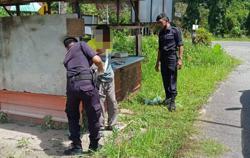 A MENTALLY unsound man drove his car through police roadblocks and caused accidents but was finally arrested after over an hour of pursuit in Kuala Berang, Terengganu, Harian Metro reported.

“The driver ignored seven stop orders from the police and hit a car and two motorcycles.

“The victims have been rushed to hospital,” he said.

The man, he added, put up a struggle before he was arrested and sent to hospital.

Initial investigations showed that he suffers from schizophrenia.> A clerk became RM31,000 poorer after signing up for a part-time job she found on Facebook, Sinar Harian reported.

The 23-year-old from Kuantan was promised a high commission if she could boost the online ratings of some products in an app but she had to first sign up for an account through the app.

Pahang Commercial CID chief Supt Mohd Wazir Mohd Yusof said the victim wanted to rake in more commission and resorted to transferring more money into her account in the app.

“The victim noticed something was amiss when she could not use the money in the app.

“A check on the account also found some errors,” he said.

Separately, a nurse from Kuantan lost RM1,500 to a stranger who posed as her elder sister.

She received a message from a different number asking to borrow the money urgently and promising to return it in a few hours.

After transferring the money to an account, the victim called her sister’s number to check, only to find out she had been cheated.

In another case, a lorry driver’s wish to buy three goats for Hari Raya Aidiladha fell through when he lost RM6,800 to a scammer.

The 30-year-old from Temerloh said he saw ads from a seller offering three goats at RM2,800 on Facebook and contacted him.

He proceeded and paid RM1,400 in deposit into a company’s account.

He then got his younger brother to transfer the remaining RM1,400 to the same account.

However, he was then asked to pay another RM4,000 in processing charges to another man’s account.

Realising something was wrong, he lodged a report at the Temerloh police station.