Penang police chief Comm Datuk Sahabudin Abd Manan said a total of 4.06 million sticks of white cigarettes and 691,200 sticks of unfiltered cigarettes, worth a total of RM7.8mil, were seized during the raid at about 5am on Saturday (June 26).

"We believe the suspects obtained their supplies from neighbouring countries and have been active in the northern region for the past four months.

"Five of them have criminal records involving drugs, gambling and violations of the Customs Act," Comm Sahabudin said at a press conference at the central Seberang Prai police headquarters in Bandar Perda on Monday (June 28).

He added that nine vehicles worth about RM236,000 were also seized during the operation, dubbed "Op Kontraban". 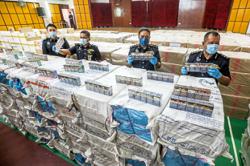