The Transport Minister said industry players under the Federation of Motor and Credit Companies Associations of Malaysia (FMCCAM) have embraced technology as the way forward, and such willingness is laudable.

“FMCCAM has laid a good foundation in preparing for unknown challenges. Because they were bold in embracing technology, the automobile industry can still serve the public during the movement control order.

“Their effort has also paid off handsomely, as online vehicle ownership transfers account for an average of RM40mil each year.

“This is an excellent milestone achieved by an association,” he said in his speech at the federation’s 43rd annual general meeting held online yesterday.

Dr Wee said except for the initial lockdown in March 2020, car sales have generally not been affected by the pandemic.

He was referring to the online vehicle ownership transfer system that was initially launched in 2012, and further improved in 2015.

“The system was developed from scratch and to start something new is not an easy task. But look at the situation today.

“I believe online transactions will continue to increase as contactless transactions are the trend now,” said Dr Wee, who also gave his assurance that the government would continue to listen to the business community for their feedback on issues affecting them.

Using the MyKad and thumbprint verification of both parties, STMS allows the vehicle’s ownership to be transferred to used car dealers temporarily for six months.

If the vehicle fails to find a buyer within six months, then the Automatic Ownership Transfer for permanent ownership to the used car dealers will be effective.

Then there is the eSerahan Tukar Milik (eSTM) – an extension of STMS – where the transfer process is made safer using the biometric features of the MyKad and thumbprint verification of the seller and buyer.

Earlier, FMCCAM president Datuk Khor Chong Boon said despite most business sectors being affected, car sales have grown 20% as 347,000 online ownership transfers took place between January and May this year.

“Last year, we achieved our target and saw 601,102 ownership transfers through the STMS and eSTM systems. This would not have happened without the systems as these cases would require 1.2 million trips and extra manhours if done over the counter,” he said.

The online systems, added Khor, have also made JPJ’s task easier by digitally processing the collection of RM40mil in transfer fees from transactions.

He called on the government to further simplify the vehicle ownership transfer process by allowing systems partners to print out the physical version of the Vehicle Ownership Certificate (VOC), which now can only be printed at JPJ offices.

“As for the road tax document, all our members are ready to invest and set up kiosks at all state associations and key auto cities to make things easier, without passing the burden to buyers.

“We also call on the government to allow us to conduct vehicle inspections by setting up a working committee together and include us when drafting relevant policies,” he added. 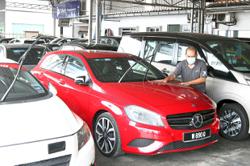