JOHOR BARU: A man who allegedly beat up his pregnant wife last month has been arrested in Kuala Lumpur.

Johor Baru South OCPD Asst Comm Mohd Padzli Mohd Zain said that the 38-year-old man was arrested at about 11am on Friday (June 11) at Taman Bukit Angsana in Kuala Lumpur.

"The arrest was made following an investigation by the Johor Baru South police's criminal investigation department under Section 325 of the Penal Code," said ACP Mohd Padzli.

He added in a statement on Saturday (June 12) that the suspect would be remanded for six days from June 12.

The 43-year-old wife, who is four months pregnant, suffered serious injuries and lapsed in a coma on May 4.

On May 18, police released a photo of the suspect in an effort to locate him. 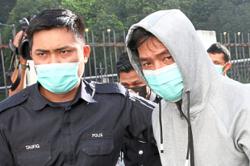