PETALING JAYA: Tun Dr Mahathir Mohamad (pic) has proposed that a body similar to the National Operations Council (NOC) be created to deal with the Covid-19 pandemic in the country.

The NOC, known in the past as Mageran, managed to resolve problems in the country when an Emergency proclamation was declared following the May 13 racial riots in 1969, added the Parti Pejuang Tanah Air pro tem chairman.

“I believe it can work today as it did then. Pejuang has had in-depth discussions on how to solve the country’s current problems but we have no power to implement them, ” he told a virtual press conference after his audience with Yang di-Pertuan Agong Al-Sultan Abdullah Ri’ayatuddin Al-Mustafa Billah Shah at Istana Negara yesterday.

The former prime minister said he pointed out to His Majesty how the then NOC director of operations Tun Abdul Razak Hussein led the council to resolve the country’s problems and restored national stability which lasted for long.

He said the King advised him that such a proposal should come from the government.

Dr Mahathir added that he offered his services to lead the NOC.

On Wednesday, Prime Minister Tan Sri Muhyiddin Yassin’s principal private secretary Datuk Dr Marzuki Mohamad said the setting up of an NOC was not appropriate at this time.

“To set up Mageran is a step backwards which would inhibit the plans of the government and the efforts of the civil service, frontliners, industry players and all the rakyat to restore the country from the current health and economic crises, ” he said in a video posted on his Facebook.

With the right mechanisms in place to handle the pandemic, he added things would return to normal once herd immunity is achieved before the end of the year.

Dr Mahathir was among four political leaders who met the King yesterday to discuss the country’s political landscape, with the proclamation of Emergency due to end on Aug 1. 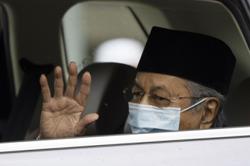