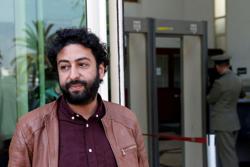 KLANG: A member of the Penang state legislative assembly has claimed trial to a sexual assault charge at the Shah Alam Magistrate’s Court.

First-term assemblyman Muhammad Faiz, who is a son of well-respected former PAS president, the late Datuk Fadzil Noor, was charged under Section 354 of the Penal Code, which makes him liable to a jail term of 10 years, a fine, caning or all three, upon conviction.

According to a news portal, the charge sheet against Muhammad Faiz stated that he had used force with the aim of outraging the modesty of a 31-year-old woman between 9.45pm and 11.30pm on March 8.

He had allegedly committed the offence in a car from Sunway to Subang Jaya.

Previous media reports said that the woman was a PKR member.

In March, Muhammad Faiz issued a media statement denying such an incident had happened and said he was mulling legal action against those accusing him.

Yesterday, Mohamad Redza set bail at RM10, 000 and ordered all documents be submitted by Aug 6.