BUTTERWORTH: Some 400,000 factory workers in Penang are expected to take the on-site polymerase chain reaction (RT-PCR) test using the deep throat saliva method to step up mass testing over the next few weeks.

Five factories have tested their workers using the method since Saturday to speed up testing and increase the number of Covid-19 screenings.

Federation of Malaysian Manufacturers (FMM) Penang chairman Datuk Jimmy Ong said the mass testing, believed to be first involving factories in the country, would show a spike in Covid-19 cases in Penang but more importantly, ensure early detection of clusters.

“When there is mass testing, it is expected that there will be a spike in the cases. It is up to individual companies to come onboard and test their workers.

“It is cost effective as they will only have to spend RM60 per worker rather than RM200 to RM250 in private testing, ” he said.

Ong said the pool testing method would be used, with multiple samples combined in order to carry out one test on the whole batch.

“It means workers who stay together, work in the same department or use the same transportation, will be pooled together based on the categories mentioned before the test is conducted.

“The lab involved will do the grouping and test them based on the pools they fall under. Different workers from each pool will be tested on a rotation basis every few weeks.

“If it comes back positive for Covid-19, then the whole group of workers will be tested, ” he added.

Ong said for the second round of testing, not all workers needed to be involved.

“You can test 20% of them every two weeks or over a month. This means fewer number of tests and early detection of cases, which will reduce the chance of clusters at work, ” he said.

He added under this method, the worker who tests positive will get to isolate with his pool of colleagues quickly, thus reducing chances of it spreading to other pools in the factory. He said factories have been hard hit by the pandemic and it was tedious and costly to continuously test workers.

At a manufacturing company in Simpang Ampat, Penang mainland, its general manager Sim Saw Beng said all 111 workers including himself will be tested at the factory.

“This is a simple and cost effective way, without having to wait for someone to show symptoms, ” he added.

Dr Lee Toong Chow, who was at the factory to explain the testing procedure, said the mass testing method can be effective as it will create a clean bubble for factories when tested every few weeks.

In February this year, the Health Ministry approved the method as an alternative way to collect samples from an individual.

Health Minister Datuk Seri Dr Adham Baba had said that the deep throat saliva sampling method was safe and not invasive compared to the nasopharyngeal (nose) and oropharyngeal (throat) swab. 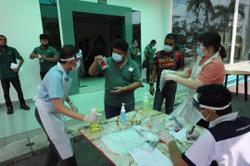