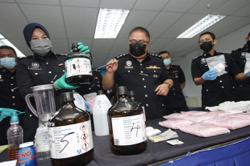 KUALA LUMPUR: Police have seized RM204,943 worth of drugs in a raid on an apartment unit in Bukit Jalil here.

Brickfields OCPD Asst Comm Anuar Omar said three men and a woman were also detained during the raid at 12.30am on May 16.

"We seized an array of drugs including 5.18kg of syabu, 299.4g of MDMA powder, 5.7g of ecstasy pills and one piece of lysergic acid diethylamide (LSD).

"All four suspects tested positive for methamphetamine," he told a press conference at Brickfields police headquarters on Monday (May 24).

ACP Anuar said the syndicate has been operating for about six months.

"We believe they were supplying the Klang Valley market.

"We will investigate the extent of their network and the source of the drugs," he added.

The drugs seized could have been supplied to 10,600 addicts, ACP Anuar said.

"Those arrested have been remanded until Tuesday (May 25)," he said, urging anyone with information on drug offences or other criminal incidents to contact the nearest police station immediately.