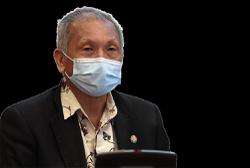 KUALA LUMPUR: A syndicate which steals vehicle exhausts for export has been busted with the arrest of eight men in the Klang Valley.

"Two of those arrested had prior criminal records, including for drug-related offences.

"We also seized various items including a lorry used for the thefts, car keys and six electric saws," he told a press conference at Brickfields police headquarters on Monday (May 24).

Further Investigations led police to two other men in Batu Caves and Klang, he added.

"We also seized some 30 car exhausts and a four-wheel drive in Klang.

"We learned that the syndicate would steal the car exhausts and export them to Japan and Germany.

"We believe their buyers overseas would extract ceramic materials from the exhausts to produce white gold," ACP Anuar said.

All those arrested have been remanded until Tuesday (May 25), he added.

"We believe the syndicate targeted cars parked outside in housing areas.

"They would usually operate between midnight and 4am," he said.

ACP Anuar also urged those with missing car exhausts to come forward to assist in investigations.