The Foreign Minister said the UN General Assembly must call a special session immediately to address the UNSC's “deafening silence" over Israeli hostilities.

"Malaysia will never recognise any blatant seizures of Palestinian land by Israel for their illegal settlements.

"Malaysia is disappointed by the UNSC’s inability to come up with a unified position to halt Israel’s violence against Palestinians.

"This is the third session of the UNSC this week and yet not a single statement has been released on the current situation in Palestine.

"In the absence of the council's unified action, Malaysia, in line with our joint call with Brunei Darussalam and Indonesia, urges the General Assembly to convene a special session to immediately end the hostilities.

"The UN must force Israel to comply with all obligations by international law as well as the UN Charter," he said in a statement on Monday (May 17).

He added that during the UNSC open-video teleconference debate on the situation in the Middle East on Sunday (May 16), Malaysia urged the council to exercise its primary responsibility of maintaining peace and security in the region.

He said UNSC must make full use of available tools to avoid an escalation of violence and prevent further loss of life in Palestine.

"First, the UNSC must act immediately, and fulfil its duties under the UN Charter.

"Next, it must speak with one voice, and act swiftly and decisively to respond to the series of Israeli aggressions.

"Thirdly, it must revisit the recommendation contained in the secretary-general’s report in 2018, A/ES-10/794, on the deployment of UN-mandated armed forces or unarmed observers to improve the protection of Palestinians.

"Once again, Malaysia condemns in the strongest terms the incursion, indiscriminate and escalating attacks by the Israeli Occupation Forces and Israeli settlers against Palestinian civilians and worshippers in Al-Aqsa Mosque.

"Malaysia also condemns in the strongest terms all forced evictions of Palestinians from their homes, including those in the Sheikh Jarrah and Silwan neighbourhoods of East Jerusalem," said Hishammuddin.

It has been reported that Israel's latest round of incursions and attacks on Palestinians started with its storming of the Al-Aqsa Mosque on May 7 and airstrikes in the Gaza Strip since last week.

According to a CNN report on Monday, the death toll in Gaza has climbed to almost 200, including 58 children. 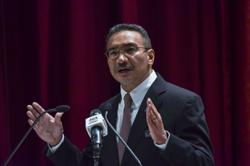