PETALING JAYA: The United Nations General Assembly and The UN Security Council need to be firm in enforcing international and human right laws to end the violent acts of Israel's Zionist regime on the Palestinians, says the Dewan Negara Caucus of People's Well-Being.

Caucus chairman Senator Datuk Razali Idris said the two organisations must put their foot down and take action on the alleged war crimes that violate the Fourth Geneva Convention 1949.

"We hope that the Israel-Palestinian conflict can be best solved through negotiations that result in long-term regional peace," he said in a statement on Sunday (May 16).

Razali also called on all Malaysians, including NGOs, corporate bodies and political parties to unite and condemn Israel's attacks on Palestine.

"The Caucus also supports the Prime Minister's view that a two-state solution would be the fairest solution to the conflict and should be based borders drawn before 1967 with Jerusalem being the capital of Palestine.

"This is the only solution to the conflict," he said.

On Saturday (May 15), Muhyiddin said Malaysia would take the lead in issuing a joint statement with Indonesia and Brunei to condemn Israel's attacks on Palestine.

The agreement was reached after his telephone call with the Indonesian leader and Muhyiddin said he had also liaised with Brunei's Sultan Hassanal to discuss the actions of the three neighbouring Southeast Asian countries regarding current developments in Palestine. 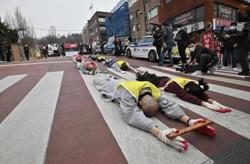