PETALING JAYA: Traffic in the Klang Valley was congested on the first day of the nationwide MCO 3.0 on Wednesday (May 12) after multiple roadblocks were set up by police to bring down Covid-19 cases which have seen a spike in recent days.

There were roadblocks set up in both directions by the police since 8am at the Kota Darul Ehsan arch on the Federal Highway, which marks the Selangor and Federal Territories border, where four lanes were reduced to just two.

Roadblocks were also set up both ways by the police at the Sungai Besi toll booth.

According to Astro Radio Traffic, there is a 50-minute delay from Amcorp Mall heading to the Kota Darul Ehsan Arch.

“There’s also a crawl on the opposite side from Kerinchi” it added.

Meanwhile, according to the Kuala Lumpur City Hall (DBKL) Integrated Transport Information System (Itis), traffic has been crawling along Scott Garden at Old Klang Road towards SMK Kuen Cheng at Jalan Syed Putra since 9am.

They also tweeted that traffic was congested at the Sungai Besi and Gombak toll plazas since 8am.

There was also heavy traffic reported from Jalan Istana towards Muzium Negara since 8am in the morning, said Itis.

At the same time, Astro Radio Traffic advised Malaysians to avoid Jalan Syed Putra, as there is a 19-minute delay due to roadblocks.

Traffic has been severely congested in recent days after the movement control order (MCO) was reimposed nationwide.

On Monday (May 10), motorists reported that the traffic congestion was severe and many were stuck on the road for hours.

Under the ongoing MCO, all interstate and inter-district travel without police approval is not permitted.

However, all economic sectors are allowed to operate as usual. 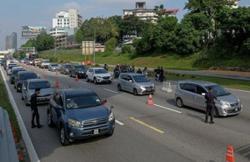