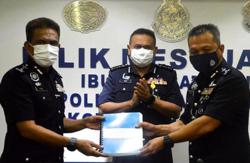 KUALA LUMPUR: Bukit Aman has opened investigations into the alleged abuse of power of the Sarawak deputy police commissioner.

"The department has opened investigations on all the complaints in a transparent and thorough manner.

"Necessary action will be taken if any statement received reveals misconduct or abuse of power by the senior police officer," he said.

He assured the public that the police force would not protect anyone who was involved in misconduct, irregularities or abuse of power.