PETALING JAYA: About 80% of the current Covid-19 cases in the country are from sporadic infections within the community and not from clusters, says Tan Sri Dr Noor Hisham Abdullah.

The Health director-general said this is a worrying trend where 92% of the cases have so far involved locals.

“A total of 80% of infections are not from the clusters but are sporadic cases from the community.

He was speaking at his first joint press conference on the pandemic with Senior Minister Datuk Seri Ismail Sabri Yaakob on Tuesday (May 11).

“We have an increase in 14 new South African variant cases, bringing the total cases to 62, ” Dr Noor Hisham further said.

Of the 14 new cases, they were detected in Kelantan (eight), Selangor (three), Kedah (two) and one in Negeri Sembilan, he revealed.

“We are worried that the virus is spreading faster and we believe it has already spread to many states.

“That is why we have to implement the movement control order to curb the virus from spreading among the rakyat, ” he said.

Apart from the highly infectious South African variant, he said that eight cases with the UK variant and two with the Indian variant have also been detected so far, while the country is still free of the Brazilian variant. 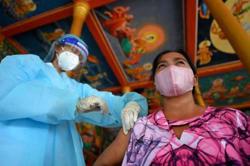 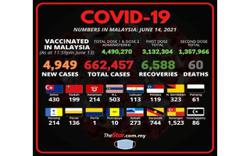