GEORGE TOWN: It is definitely sweet to be able to celebrate Hari Raya with family and friends in kampungs but some university students are still undecided on whether to return home due to the increasing number of Covid-19 cases.

Postgraduate student Abdul Basit Amran, 27, said he was worried about his parents’ safety and health.

“I did not make it home for Hari Raya last year due to the interstate travel ban and sadly, I think it will be the same this year.

“Since my parents are both from the high-risk group, I am worried that I might contract the virus on the way home and pass it to them, ” he said.

Abdul Basit said his friends and him celebrated Hari Raya together last year since it was compulsory for students to stay on campus then.

“We prepared some dishes and enjoyed ourselves in the hostel.

“However, most of my friends have decided to go home this time.

“I guess I’ll celebrate Hari Raya with my international friends if I could not make it home again this year, ” he said in a phone interview.

Mass communication student Nurul Qistina Muhamad Azhan, 22, who is currently studying in Shah Alam, Selangor, said she would not be returning to her hometown in Pasir Puteh, Kelantan.

“I wish I could balik kampung but the rising number of positive cases is worrying and I think it’s better for me to stay put for now.

“I am thankful that I have some relatives in Selangor who have invited me over to celebrate with them, ” she said.

Another student Ben Liew, 23, said he opted not to return home although he was allowed to.

“Most of my friends have decided to stay on our campus in Melaka.

“I usually travel back to my hometown in Ipoh by bus but I was told that students are not allowed to travel home by public transport.

“However, I am really happy that some of my Muslim friends get to head home during the festive season as they missed the celebration last year, ” he said.

Meanwhile, Universiti Putra Malaysia (UPM) student representative council (SRC) president Muhammad Huzaifi Ismut also said he would remain on campus as the council was involved in helping other students return to their hometowns.

“As I am the president, I believe I have a responsibility to be with my peers on campus to give them moral support and cheer them on since they can’t celebrate Raya with their families this year.

“It’s my first Raya in the campus and I am excited although I will be away from my family.

“The university will be holding celebrations on a small scale and comply with the SOP to keep those of us who can’t go back in good spirits, ” he said.

Students at higher learning institutions will be allowed to cross state borders and return home for the coming Hari Raya Aidilfitri.

The Higher Education Ministry said the students could leave their campus and go home from Friday.

“The dates for students to return home are from May 7-12 and they will come back to campus from May 15-20.

“The respective institutions will prepare an approval letter for the students to travel and also coordinate the dates of departure and return.

“Only three modes of travel are allowed – using their own vehicles, parents picking them up or using buses arranged by the respective institutions, ” the ministry said in a statement on April 29, adding that except for flights, students were not allowed to use public transport.

The ministry said the National Security Council agreed in a special meeting on Wednesday to allow students from higher learning institutions to go home for the festive break, except to Sarawak.

There are 1.3 million students in higher learning institutions and the exodus is expected to involve 104,994 students. 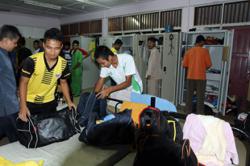