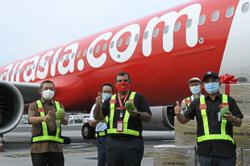 KUALA LUMPUR: From Perlis to Sabah, half a tonne of Harumanis mangoes have jetted off to the Land Below the Wind on an AirAsia flight so that Sabahans may get their hands on the popular seasonal fruit.

Airasia farm, now an official distributor of Harumanis through cooperation with the Agriculture and Food Industries Ministry, sent the first shipment of the fruits to Sabah from KLIA2 on Friday (April 30) morning.

"The whole idea of airasia farm came from Sabah, I travelled to Kudat, Tawau and Sandakan where I met farmers and saw how they lost a lot of margin to suppliers due to logistics.

"That's the birth of airasia farm.

"We are now working with over 2,000 farmers in Malaysia supplying 300 businesses throughout Malaysia with various products from fruits and vegetables to eggs and anchovies.

"It has taken less than 72 hours to send out the first shipment of Harumanis from Perlis to Sabah and the fruits are truly fresh," Fernandes told a press conference at KLIA2 on Friday.

He said that with innovative technology of Malaysian inventions such as the StixFresh fruit sticker, the shelf life and freshness of the mangoes can be prolonged to six months.

“We anticipate about 50% will be sold online through e-commerce platforms such as airasia food, airasia fresh and agrobazaar online," he said.

He added that the Harumanis industry would not only increase the income of over 2,415 farmers across Perlis, but also have a significant impact on the economy as well as agro-tourism and supply chain industries across the country.

Earlier, he sent off the AirAsia flight along with AirAsia Group executive chairman Datuk Kamarudin Meranun and Fernandes.

The flag-off event was part of the "Harumanis Kembali Lagi" (Harumanis Returns) campaign led by the ministry in collaboration with the Agriculture Department and Federal Agricultural Marketing Authority of Perlis to promote the mangoes.

The mangoes will be sent to AirAsia's Tune Hotels in Kota Kinabalu as a pickup point for its delivery partners in Sabah.

The signature Perlis mangoes are now available for online order on airasia fresh and airasia food in the peninsula as well as on foodpanda in Sabah.