KUALA LUMPUR (Reuters) -Australian miner Lynas Rare Earths Limited is working to provide more information requested by Malaysian authorities to resume an assessment of its application to build a facility for its low-level radioactive waste, it said on Wednesday.

Malaysia’s Department of Environment (DOE) has marked on its website a rejection for Lynas’ Jan. 26 Environmental Impact Assessment (EIA) application to build a permanent disposal facility, but the company said in a statement that that was due to the initial 12-week period expiring.

Lynas, the largest rare earths producer outside China, said the DOE has requested further information and the company is working together with the relevant Malaysian federal and state governments to submit the information.

“Once the information is provided, Lynas has been advised by the DOE that the assessment of the EIA will resume, ” it said.

Lynas was granted a three-year licence renewal from Malaysia’s Atomic Energy Licensing Board in February last year to operate its $800-million plant in the east-coast town of Kuantan.

The license renewal came with conditions for Lynas to meet, including building a cracking and leaching facility outside Malaysia before July 2023, after which the company will not be allowed to import raw materials containing naturally occurring radioactive material.

The company would also have to begin developing a permanent disposal facility for low-level radioactive waste from rare-earths processing within the first year from the date of approval of the licence.

Malaysia approved a site in the state of Pahang for the facility last year.

The waste has been a contentious issue as activists have protested for years against Lynas’ operations in the country, citing health concerns. - Reuters 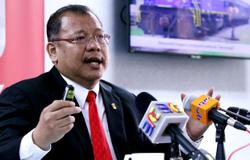