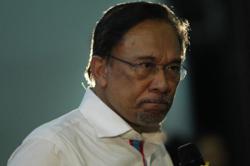 KUALA LUMPUR: Opposition leader Datuk Seri Anwar Ibrahim was called in by Bukit Aman to have his statement recorded as a "witness".

Speaking to reporters after spending about one and a half hours with investigating officers, Anwar said he was told that his statement was recorded as a witness as part of an investigation under Section 505(b) of the Penal Code for publishing or circulating any statement or rumour with intent to cause public fear.

The PKR president was accompanied by his lawyers Datuk Sankara N. Nair and Ramkarpal Singh.

"The question here is I don't know what corruption, threat or crime this case is linked to. During the session, I also raised several issues with the police such as why was this issue being politicised and what connection this has to the economic recession?

"I also pointed out that there is another audio clip purportedly involving the Prime Minister (Tan Sri Muhyiddin Yassin). I believe many have heard the audio clip which discusses threats, corruption and GLC (government-linked company appointments," Anwar said, adding that he asked the investigators if there was any investigation into the matter.

Anwar also said that as far as he knew, there was none.

"So there are double standards between the leadership and normal people involving investigations, prosecution and punishment.

"There is also an audio clip purported of the Home Minister (Datuk Seri Hamzah Zainudin) on organising his people as officers in the top brass of the police force.

"So I ask again, is there any investigation into this which is far more serious as it breaks the rules and goes against his assurances of not getting involved in police administration," he said.

When asked if Umno president Datuk Seri Dr Ahmad Zahid Hamidi would also be called up for questioning, Anwar sniggered, saying that "another audio clip would be circulated".

Separately, Ramkarpal said as far as they were concerned, there was no criminal element.

Sankara said it was an abuse of the police and that the case under Section 505(b) is not a seizeable offence.