SHAH ALAM (Bernama): The decision to close schools in Selangor due to Covid-19 cases is under the jurisdiction of the state Education Department following discussions with district health centres and the state Health Department, says Datuk Seri Amirudin Shari (pic).

The Selangor Mentri Besar said the previous closure of 19 schools in the state did not follow the proper channels but was still accepted.

"This time we will follow the format where schools will be closed after being informed by district health centres and the state Health Department," he told reporters after the opening ceremony of the Selangor Hybrid 2021 Women's Revenue Expo and launch of Selangor Empowered Women here Monday (April 26).

Amirudin also said that any implementation of an enhanced movement control order would be decided by the Federal Government.

Amiruddin was asked to confirm the distribution of a list regarding closures of 79 schools for two days starting Monday due to the spread of the Covid-19 infections believed to be circulated by the state Education Department that went viral Monday.

He said he would not make any announcements regarding the matter as only the National Security Council (MKN) and Education Ministry (MOE) could do so. - Bernama 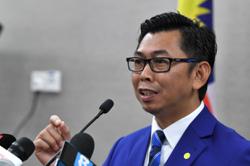