JOHOR BARU: The state government will keep pushing for the reopening of its two land border checkpoints with Singapore with a new standard operating procedure in June to create a travel bubble between the two countries for those who need to commute regularly.

Johor Mentri Besar Datuk Hasni Mohammad said besides being vaccinated, the 100,000 workers going to Singapore would need to follow a fixed route to and from their workplace, and not be allowed to travel to other parts of the country.

“We want to have a mechanism to control the movement of our people. That means they travel from Point A to Point B, similar to our lorry drivers and their co-drivers who have to commute daily to a specific destination (in Singapore) to send their goods, ” he said.

Hasni hoped the new SOP proposed by the Johor government would provide assurance for Singapore when the issue of border reopening is discussed by both prime ministers in Singapore on May 3.“Malaysia is also looking at having a travel bubble with other countries such as the United Kingdom, Australia and countries in the Middle East, ” he said, adding that the border closure had brought a lot of hardship to Johor due to the shutdown of a number of businesses there.

Hasni was speaking to reporters at the launch of the Modul Kesedaran Jenayah Kanak-Kanak dan Remaja (Mekar) at Universiti Teknologi Malaysia here yesterday. 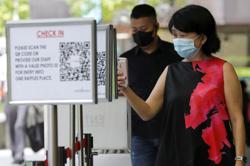