School’s out: Parents waiting to pick up their children at a school in Kuala Lumpur in this file picture.

PETALING JAYA: It’s been a week since schools reopened but overcrowding, especially after school, is still a problem, say Parent Teacher Associations (PTAs).

They said more needs to be done by the authorities to address this issue.

A mother, who only wants to be known as Sonia, said students in her sons’ school here did not adhere to physical distancing while waiting for their parents.

She said many of them had to wait for their transport, causing chaos in the school compound.

Another parent, Rodney Teoh, said there was no one to watch over the students once they were out of the school compound.

He said a mix of factors such as parents, students and transport providers not knowing where to wait resulted in overcrowding.

Melaka Action Group for Parents in Education chairman Mak Chee Kin suggested that police or health officers be stationed in schools to monitor the dismissal.

“A warning could be given to stubborn parents if they disregard the SOP, ” he said.

The country’s five million students are now back in schools.

Schools nationwide started welcoming back students as early as March 1 with pre-schoolers and pupils in Year One and Two.

This was followed by Year Three to Six a week later.

All secondary students resumed schooling on April 5 after five months, starting with those in Johor, Kedah, Kelantan and Terengganu the day before.

“Most of them have improved and are more responsible now but the situation is far from satisfying.

“Unfortunately, most national schools don’t have the infrastructure for parents to wait for their children. The Education Ministry’s protocols and SOP for schools are already very tight.

“What needs to be done is to arrange for the police to monitor at least 30 minutes after the students are dismissed, ” he said, adding that some parents volunteered by preparing numbered cards and a system to ensure faster dispersal and to avoid crowds from building up.

Chooi has three children in Year One, Four and Six studying in the school.

Azwan Zar Abd Rashid, whose sons are in Year One and Four, said their school had an organised system in place during dismissal.

“There are two levels. The first level is for pupils who commute via bus and other transport services.

“The second is for those who return with their parents, ” he said, adding that teachers closely monitored all exits at all times.

A father of a Year One pupil, who only wanted to be known as Mike, agreed with Azwan, saying a staggered method of dismissing a large number of pupils had improved the situation in his son’s Chinese vernacular school.

Faizal Mohammad Arshad, who is SMK Cochrane and SMK (P) Bandaraya PTA chairman, said both schools did not have overcrowding problems, attributing it to the effective communications between parents and the schools.

“We have a structured method in dismissing the students.

“Each batch of students have their timing and their respective exit gates to wait.

“We cannot always blame the schools because sometimes, it’s the parents who don’t comply with the SOP.

“Their kids will tell them where to wait but they end up waiting elsewhere, causing unnecessary build-up, ” he said, adding that PTAs were important mediators between schools and parents. 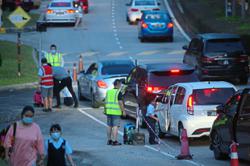