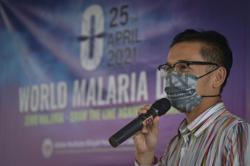 MENGETEH or ngeteh – having coffee or tea with friends in restaurants or stalls after subuh (dawn) prayers in mosques or surau – was one factor behind the emergence of a Covid-19 cluster in Besut, Terengganu, Berita Harian reported.

State health director Dr Nor Azimi Yunus said residents in Kampung Bela Oh did not comply with the Covid-19 SOP when having their morning beverage.

This has resulted in the Besut district becoming a red zone after new cases were recorded in the Beloah cluster, bringing the total number of cases there to 49.

“In the blink of an eye, Besut became a red zone. Imagine if we had not implemented the enhanced movement control, there would be a huge cluster in Besut, especially with Ramadan coming soon.

“Please respect their sacrifices by obeying the SOP, ” Dr Nor Azimi posted on Facebook.

> Actress Janna Nick showed her vulnerable side when she revealed the pressure and stress she is facing from her relentless work schedule, Kosmo! reported.

In an Instagram post, she showed a video of herself crying while driving a car, accompanied by a caption that began with the words “I’m a failure”.

“I like working, I’m not the kind who can sit idly by. (But) my schedule is packed until the end of this year. My body is so tired, but my brain is not. My brain keeps pushing my body to keep working.

“Even on days when I want to rest, my brain will force me to think, think and think some more!” she wrote.

Janna added that the image she had cultivated for herself was a “mask” in an attempt to cover up her unhappy past.

“It is a false reality that I’ve created to make me look happy and have a perfect life. But she’s not the real me. I’m tired of always having to pretend to be someone else. But no worries, I’ll fix myself, ” she said.