PETALING JAYA: The acquisition of new Electric Train Set (ETS) coaches by Keretapi Tanah Melayu Bhd was done via direct negotiation after all bidders failed to fulfil the requirements set by the government, says the Transport Ministry.

At the same time, the government had set an estimate of RM587mil for the acquisition but only RM456mil would be used in the direct negotiation, saving the government about RM131mil, the ministry added.

The direct negotiation was approved by the Finance Ministry, said the ministry, adding that since the tender for 10 sets of the ETS’ coaches was issued, only three bidders had tabled their proposals and submitted the Tender Assessment Report to the Acquisition Board on June 23 last year.

The ministry said the three bidders failed their finances and technicalities assessments and other criteria in the tendering documents.

“The ministry proposed direct negotiations because no bidders passed (the assessment). The retendering process will take time and it is challenging to get a company registered under the train-building category.”

The ministry was responding to an article published by the Sabahkini2 blog which claimed that cronies were awarded the new ETS coaches projects.

A police report has been lodged over the matter and advice sought from lawyers for legal redress. 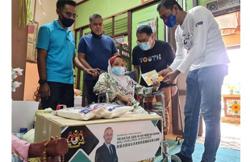