These include eco-tourism, mangrove and fisheries, carbon transaction, herbal medicine and the pharmaceutical industry, he said.

"The forest is more than just a source of timber. We can generate more economic opportunities, particularly based on sustainability, by protecting and conserving our forests," he said when launching the state-level International Forest Day at the State Forestry Department Headquarters in Sandakan on Thursday (April 8).

"New income sources from forests need to be explored and maximised through R&D activities," Hajiji said, adding that R&D support was crucial for sustainable forest management and ecosystem conservation.

He said the state government's stand on sustainability and conservation was reflected in the five-year Halatuju Sabah Maju Jaya plan that was launched recently.

“The state government, through the Forestry Department, will be unrelenting in its efforts to restore degraded forests throughout Sabah, ” he said.

Hajiji added that some 101,038ha of degraded forest have been identified for reforestation in the state while about 63,000ha have already been replanted at a cost of RM316mil.

Meanwhile, Hajiji said through the 100 Million Tree-Planting campaign launched in January under the Greening Malaysia Agenda, a total of 333,903 trees have been planted in Sabah up to March.

Sabah has set a target of 40 million trees in the span of five years, kick-started with the planting of six Merbau trees in the State Administrative Centre compound early this year, he added.

Hajiji said Sabah had received allocations of RM4mil for nursery development and public awareness campaigns, RM2.5mil for replanting and conservation of mangrove forests, and RM6mil for the Heart of Borneo initiative.

Later, the Chief Minister presented tree seedlings to representatives from government agencies, institutions of higher learning and NGOs under the tree-planting campaign.

He also planted a belian tree (Eusideroxylon zwageri) at the compound of the Forestry office. 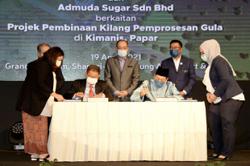