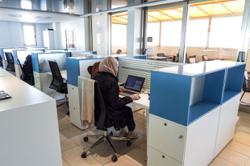 Well-deserved ‘paws’: Workers getting up close and friendly with the animals at a pet-friendly co-working space in George Town. — CHAN BOON KAI/The Star

GEORGE TOWN: With the Covid-19 pandemic still affecting the economy, more business premises and hotels are being transformed into co-working spaces, or even pet-friendly co-working centres.

“Working from home or having flexible working hours is the trend among corporate workers and businessmen.

“This is where we come in. We provide working space and rooms for people to work or conduct meetings.

“As we allow them to bring their pets in, this will solve their worries of having to leave their pets at home,” she said.

Tan said many businesses and companies were left to wonder what was next when Covid-19 led to the first movement control order (MCO) in March last year.

“Our business was badly affected when the travel restrictions came into effect.

“After that period, we saw that many other businesses were affected as well.

“At the same time, the work from home concept turned into a necessity. It was then we thought it’s best to convert our business space into a co-working space,” she added.

A hotel operator in Persiaran Gurney said many hotels started pushing for their rooms to be rented as workspaces.

“The tourism industry was badly hit after several rounds of the MCO, and we had to think of ways to survive.

“At that time, the government was encouraging people to work from home. Many hotels have been riding the trend since.

“We can really see a certain demand as workspaces are evolving.

“In the near future, who knows how the trend will change,” he said.

Soo said the response had been good so far as some people preferred a calm, relaxing environment instead of a rigid workspace.

“Hotel rooms give off such ambience and as such, the response has been okay so far,” he added.

A community manager, who oversees the operations of a co-working space in Pulau Tikus, said many were enjoying the experience, which came with many perks.

Joey Chiang said it was both cost-effective and cost-saving for those who shared working spaces, compared to those who had to rent an office, fix utilities and spend money on renovations.

“They only need to pay a price to enjoy the facilities, utilities and flexibility of using the space.

“Those who use the co-working space also have the opportunity to network and engage with others in the same space, which could lead to new collaborations and cooperation.

“With the ongoing pandemic, it is also a more flexible option for some who are worried about the economic burden.

“Some people might not want or have to spend a whole day in an office, so we provide an option for flexibility,” she added.