Latest accident: Firemen and rescuers working at the accident site near the Menora Tunnel. — Photo courtesy of Perak Bomba

IPOH: Once again an accident occurred near the Menora Tunnel on the North-South Expressway near here, which has gained a reputation for being a deadly stretch.

Human error coupled with dangerous hilly terrain make for a hazardous combination on the stretch of the expressway. This time an express bus driver and 14 passengers were injured when the 39-year-old fell dozed off behind the wheels, according to the police.

Two of the passengers were severely wounded, with a 33-year-woman injuring her waist and a 40-year-old Indonesian man suffering head injuries.

The incident occurred at about 2am yesterday at KM265.7 of the expressway, just after the tunnel.

Ipoh deputy OCPD Supt Mohamad Nordin Abdullah said the driver from Alor Star, who was lightly injured in the legs, was arrested.

The driver has 19 previous traffic summonses issued against him.

“He fell asleep for a short while and that caused the bus heading to Kuala Lumpur from Kulim to skid off the expressway before landing in a drain, ” he said.

All the victims were sent to the Raja Permaisuri Bainun Hospital here for treatment.

The case is being investigated under Section 44 (1) of the Road Transport Act 1987.

On March 17, Mentri Besar Datuk Saarani Mohamad said the state government had received a suggestion from a private company to construct an alternative expressway to Kuala Kangsar.

Saarani said the company had proposed that the expressway be constructed from Gopeng to Kuala Kangsar to avoid passing through the Menora Tunnel.

“The proposed expressway will be able to divert traffic during peak season or when there is an accident near the tunnel, ” Saarani had said. 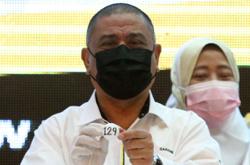 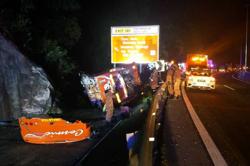