On the floor: Workers at a factory in Penang. Employees are the biggest beneficiaries of the wage subsidy programme.

The PSUs are financial assistance programmes paid to employers for local employees earning RM4,000 or less. Since then, the PSU 1.0,2.0 and 3.0 programmes have been fine-tuned and extended continuously under the Penjana and Kita Prihatin economic packages, as well as Budget 2021 and the Permai and Pemerkasa stimulus packages.

As of March 5,2021, over RM14.4bil had been channelled through the PSU programmes which had benefited 2.7 million employees and over 330,000 employers.

Sunway University Business School Economics Prof Dr Yeah Kim Leng said this is a sizeable contribution, given an estimated six million employees and close to a million or more small and medium enterprises (SMEs) in the country.

“The wage subsidies have evidently eased the economic hardships caused by the downturn, ” he said.

Under PSU 1.0, which was for a three-month period, companies that employ more than 200 people received RM600 per retained worker (capped at 200 workers).

No conditions were set for companies with fewer than 75 workers.

Companies of the other two categories (size of workforce) had to show that their income had dropped by more than 50% compared to January of 2020 or subsequent months.

Employers were required to retain their employees for at least six months – the three months during which they receive the subsidies and three months thereafter.

In January 2021, under the Permai package, the government announced that under PSU 3.0, all sectors, excluding tourism and retail, would get RM600 for each employee earning less than RM4,000 for a month.

For the tourism and retail sectors, they would get RM600 per month for up to six months.

The government also raised the limit of 200 employees per application to 500 employees. 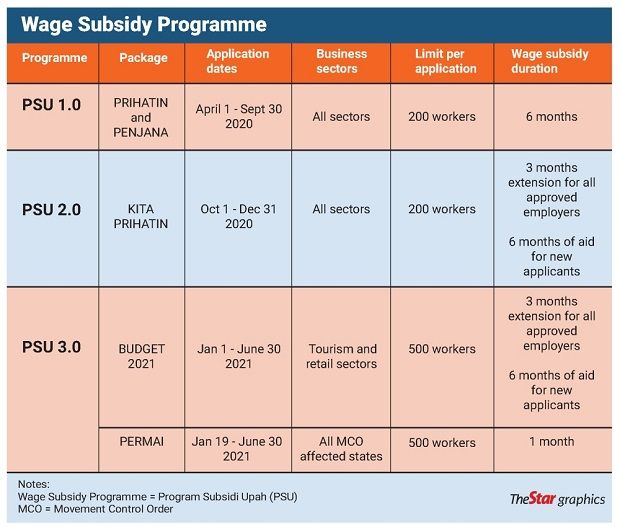 In March 2021, Muhyiddin announced that under the Pemerkasa package, another RM700mil would be allocated to extend PSU 3.0 for another three months on a targeted basis.

The Prime Minister said this was to particularly help the tourism, wholesale and retail sectors, and businesses affected by the movement control order such as gyms and spas.

“The PSUs help to maintain businesses’ capital spending and cash flow, support the well-being of wage earners until economic activities normalise, and temporarily reduce the risks of longer-term economic scarring and surge of unemployment, as well as maintaining productivity growth, ” he said.

Prof Yeah also agreed that the PSUs together with other direct and indirect financial assistance provided to businesses had certainly helped to avert an economic downturn that is worse than the 5.6% contraction in gross domestic product (GDP), lowered the number of business closures and bankruptcies, as well as capped the rise in unemployment to below 5%.

“The direct fiscal support provided by the government amounted to over 4% of GDP.

“Including the multiplier effects, a GDP contraction closer to 10% would have been the consequence had the government not mounted the counter-cyclical support, ” said Prof Yeah.

Manokaran said the effectiveness of the PSU in retaining jobs in tourism-related industries remains uncertain.

He explained that as of March 26,2021, the wholesale and retail trade sectors held the largest share of employees who benefited from the PSU (at 20% of 899,065 employees).

Meanwhile, Federation of Malaysian Manufacturers (FMM) president Tan Sri Soh Thian Lai said the PSU has been instrumental to many businesses and “continues to be among the most popular and effective initiatives that the government had introduced to keep businesses afloat”.

Malaysian Employers Federation (MEF) executive director Datuk Shamsuddin Bardan also lauded the PSUs, and said “many more businesses would have to close down without the wage subsidies. Businesses are trying their level best to retain their employees despite substantial loss in revenue due to the lockdown restrictions”.