An iconic link to the mainland Down memory lane: A news report published on Aug 4,1985 on the official opening of the Penang Bridge by Dr Mahathir.

BEFORE 1985, commuters had to depend solely on the ferry service to travel between Butterworth on the mainland to George Town on the island.

Then came the Penang Bridge, a dual lane carriageway across the channel which was opened to traffic on Sept 14,1985.

Spanning 13.5km, the cable-stayed bridge is the second longest bridge in Malaysia.

Within South-East Asia, it is in fifth position in terms of length. The idea to build the bridge came in the early 1970s after a suggestion from second prime minister Tun Abdul Razak Hussein and then Penang chief minister Tun Dr Lim Chong Eu.

In 1982, construction of the Penang Bridge officially began. It was built by Hyundai Engineering and Construction Company (Korea) Ltd from South Korea and the United Engineers Malaysia Bhd at a cost of RM800mil.

On Aug 3,1985, the bridge was completed and officially opened by then Prime Minister Tun Dr Mahathir Mohamad who drove across it in a red Proton Saga carrying the national flag.

It was a historic moment. The bridge was formally opened to the public after an official ceremony by then Penang governor Tun Datuk Dr Awang Hassan on Sept 14,1985.

It became a much used bridge, so much so that a project to widen the link was initiated in 2008.

This was done to ease traffic congestion.

The bridge, which initially had only four lanes, was widened in 2009.

Since then, there are six lanes from start to end.

It remained the only bridge for crossing until the completion of the Sultan Abdul Halim Mu’adzam Shah Bridge located further south made its debut in 2014.

It was the scene of several major accidents.

In January 2019, for instance, a 20-year-old college student was in a SUV that plunged into the sea after hitting the barrier.

The subsequent recovery effort grabbed the attention of the entire nation as it took rescuers two days to lift the car out and recover his body.

In 2010, the MPV of a young married couple hit a metal railing, sending the vehicle off the bridge. 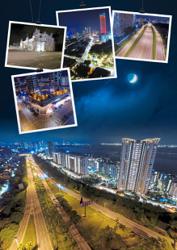