He said 91 people were issued compounds on Thursday (April 1), while another nine were remanded.

Of the total, 89 were fined for not maintaining social distancing, 10 for travelling across districts and states without approval, he said in a statement on Friday (April 2).

The task force monitoring the SOP compliance spearheaded by the police conducted 53,389 checks all over the country, he said.

Ismail Sabri also said under Ops Benteng, a total of 60 undocumented immigrants were arrested, 10 vessels and a land vehicle were seized.

"Ninety boats were also detected at the country's waters through eight scouting activities. Eleven undocumented immigrants were deported," he said.

At the same time, Ismail Sabri said 1,155 individuals who arrived at international borders were placed at quarantine stations across the country.

He said since July 24,161,044 individuals cumulatively have been placed in 77 hotels and eight public training institutes and private education institutions across the country.

"From that figure, 6,924 individuals have been quarantined and 152,899 individuals were allowed to return while 1,221 were brought to hospital," he added.

Meanwhile, Ismail Sabri said 1,992 foreigners were screened for Covid-19 and 20 were found to be positive.

He cited figures by the Human Resources Ministry, saying that there have been 669,888 foreign workers involving 34,742 employers tested for Covid-19.

"As mentioned, the Covid-19 screening is compulsory for all foreign workers beginning Feb 1 this year," he said. 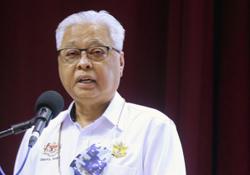