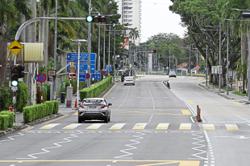 BALIK PULAU: A large road sign across the Tun Dr Lim Chong Eu expressway near Batu Baung here was seriously damaged after a tipper truck's cargo bed got caught in it.

Balik Pulau OCPD Supt A. Anbalagan said the 54-year-old driver of the tipper truck was heading from George Town towards Batu Maung when the accident occured at about 3pm Thursday (April 1).

"The driver, who is from Kulim, Kedah, has a valid driving licence.

"Initial investigations found that the truck's cargo bed suddenly lifted by itself and got caught in the road sign as it was passing by.

"No other vehicles were damaged in the incident and the truck driver did not sustain any injuries," said Supt Anbalagan.

He said police have taken the driver to undergo a urine test while the truck was sent to Puspakom for inspection.

The case is being investigated under Section 43(1) of the Road Transport Act 1987.