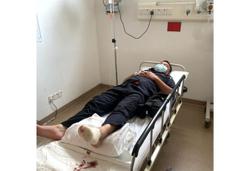 PETALING JAYA: A police investigation has been opened after eight cars had their windscreens and windows smashed near a driving range.

The police began conducting their investigations after the incident, which occurred in Kota Damansara here, had gone viral on social media.

"Eight cars were damaged and police reports had been made at the Kota Damansara police station on March 20.

He added that as of now, no suspects have been identified because there were no witnesses.

"However, efforts to trace the suspects are being conducted," he said.