KOTA KINABALU: The fight for the rights of Sabah under the Malaysia Agreement 1963 (MA63) is still on, says Sabah STAR president Datuk Seri Dr Jeffrey Kitingan.

Dismissing claims by his opponents that he had gone "silent" over various issues pertaining to Sabah's rights, he said that he was now in the government and was working within the system to push for the state's rights.

"I am not quiet. I am not repeating my ways of doing things as part of the opposition. I am with the government now and am pushing the issues within the government," said the Deputy Chief Minister.

"When we get into power we try to do as much as possible to get what we want from the inside," he added when speaking to the media at the launch of traditional fish conservation at Kg Rugading on Saturday (March 27).

"Of course, the public doesn't know. It's different when speaking inside. So believe me, I am who I am and I fight for what we have to fight for," he said.

Jeffrey added that various issues pertaining to Sabah's rights were being pushed within government and also at the Special Federal Committee on MA63 chaired by the Prime Minister.

Among others, he said that the state was eyeing to be financially independent and was working towards doubling its revenue from the current RM4bil to RM8bil or more by the end of the Gabungan Rakyat Sabah term in 2025.

“I am very confident that before the end of five years we are in power in the state government, we will double or more than double the revenue of the state, ” he said but declined to say where the sources they expected to get the increased revenue from.

On a question of how many seats Sabah STAR was looking in the next general election, he said that they were looking at eight seats but added that this would be subject to negotiations with Gabungan Rakyat Sabah partners. 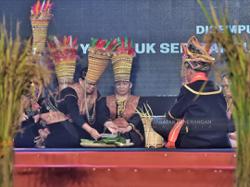