NILAI: Sixteen tonnes of Captagon pills worth a staggering RM5.2bil were seized in one of the country’s biggest crackdowns against drugs.

The drugs were found in three 40-foot containers and hidden inside trolley wheels.

The transshipment was meant to be shipped to a third country in the Far East but a tip-off from Saudi Arabian authorities put paid to the smuggling attempt by an international drug cartel.

Captagon has become the most popular recreational drug in certain parts of the Middle East in recent years.

It is a brand name for the amphetamine drug fenethylline hydrochloride and had originally been marketed for the treatment of conditions such as narcolepsy, depression and hyperactivity.

‘’We believe an international drug cartel is behind this transshipment from the Middle East using our port to a third destination.

‘’One pill costs about RM54. So, each wheel had pills worth RM54,000, ” he told reporters at the Customs (narcotics) headquarters here yesterday.

Abdul Latif said checks showed the cargo in the three containers had been declared as castor wheels.

He thanked the Saudi Arabia Home Ministry for the vital information, leading to the seizure and raid jointly carried out with the police.

Captagon has been banned in most countries since the 1980s.

Asked if any arrests were made, Abdul Latif said there were none so far.

‘’We are still investigating if the cartel had links with local syndicates.

“But what we know for certain is that the containers were a transshipment and not meant for the local market, ” he added.

Abdul Latif also refused to divulge more details, such as the origin of the containers or whether they had been in transit in another country before arriving at Port Klang.

“These cartels will always use various methods and tactics to avoid detection from the authorities.

“But with good cooperation from our foreign counterparts, we are able to thwart their activities, ” he said.

The case will be investigated under Section 39B (1)(a) of the Dangerous Drugs Act 1952, which carries the mandatory death penalty.

Abdul Latif urged those with information on any smuggling activity to alert Customs at 1-800-88-8855 or go to its nearest office.

He said such activities were not only causing the country to lose revenue but were threats to security and the people’s well-being.

“I urge the public to help us in our fight to stop the smuggling of items such as cigarettes, alcoholic beverages, fireworks, drugs and vehicles.

“Do not get involved in such wrongdoings, ” he said, adding that the identity of informers would be kept confidential. 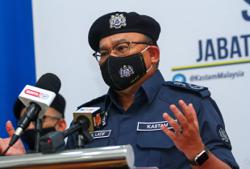