PUTRAJAYA: The Veterinary Services Department (DVS) is conducting further investigations on the CES008 farm belonging to Lay Hong Bhd following the detection of Salmonella enteritidis (SE) on a consignment of eggs exported to Singapore.

“The results of laboratory tests on the samples did not detect any salmonella bacteria, ” it said in a statement yesterday.

DVS said it would hold further discussions with the Singapore Food Agency regarding the matter, adding that it had also conducted investigations on and taken samples from the CEM014 farm to test for SE.

“DVS, through the National Animal Disease Control Programme, will enhance the salmonella monitoring programme at all 276 layer farms nationwide to ensure the safety of marketed eggs, ” it said.DVS said SE contamination occurred almost all over the world, and that it could happen at the farm due to poor biosecurity and hygiene practices.

It added that contamination could also occur along the marketing chain due to unhygienic handling of eggs.

SE can be destroyed at temperatures above 71°C, and consumers are advised to ensure eggs purchased are free of faecal contamination, stored in a suitable place and cooked properly.

The Agriculture and Food Industries Ministry has called on DVS to take immediate steps to ensure that eggs meant for export are not contaminated by SE.

“The ministry is also waiting for the full report from DVS about the issue of SE-contaminated eggs in Singapore, which were from a poultry farm in this country, including the latest incident on Saturday where a batch of eggs from another farm here was recalled (by Singapore) after the eggs were found to have been tainted by bacteria, ” Deputy Agriculture and Food Industries Minister II Datuk Che Abdullah Mat Nawi told reporters after a working visit to the Seri Pulau Area Farmers Organisation in Balik Pulau, Penang, yesterday.

Che Abdullah also said the government had allocated RM35.6mil to the Farmers’ Organisation Authority this year in a bid to help implement small enterprise projects and empower more farming entrepreneurs from among its 900,000 members nationwide. — Bernama 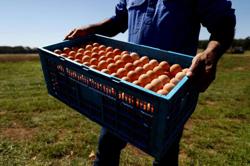