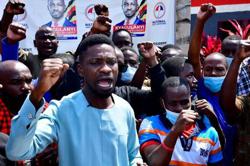 KUALA LUMPUR: A 49-year-old Datuk Seri has been charged at a Magistrate's Court here for allegedly molesting his daughter.

For the first charge, the man was accused of using criminal intimidation on the 21-year-old victim with intent to outrage her modesty.

He allegedly committed the offence at the living room of a house in Taman Kosmo Jaya between 1am and 2am on July 16, last year.

He allegedly repeated the offence at the same house, this time in front of a bedroom on the lower floor, at 12.45am on Jan 9 this year.

Both charges were framed under Section 354 of the Penal Code and the accused faces up to 10 years in jail or fine or whipping or any two of the punishments, if convicted.

The man is also facing a third charge under Section 509 of the Penal Code.

He was accused of using sexually explicit words to the victim with intent to insult her modesty.

The offence was allegedly committed inside a Mercedes Benz between 12.45am and 1am on July 17, last year.

He faces up to five years in jail or fine, or both, upon conviction.

The businessman pleaded not guilty before Magistrate Wong Chai Sia after the charges were read out here on Monday (March 22).

He said the accused is a successful businessman who owns several mini marts and could afford to pay bail.

"This is a serious case involving a father and his own daughter," he said.

The prosecutor also asked the court to seize the accused's passport and to impose a condition that the accused must not harass the witnesses, especially the victim.

Lawyer M. Puravalen, who represented the man, informed the court that his client has been on police bail for the past month due to the investigation on the case.

He said his client has seen his four children, including the victim, twice since the investigation started and that the children went to the father’s house by their own accord.

"This was all done under police supervision. Any circumstances alluding to witness tampering is not present," Puravalen said.

He added that the four siblings should not have come to the house and asked the court to grant bail between RM10,000 and RM20,000.

Lawyer Datuk K. Ganesh, who held a watching brief for the victim, stood up and told the court that the children went to the house for their school supplies.

"They are staying in Kajang now and they are very scared.

"They are going to ask for an interim protection order until the matter is resolved. To put the blame on the complainant (for coming to the father’s house) is very wrong," Ganesh added.

Magistrate Wong fixed bail at RM25,000 in one surety and ordered for the accused to surrender his passport.

She also warned the accused not to harass any of the witnesses.